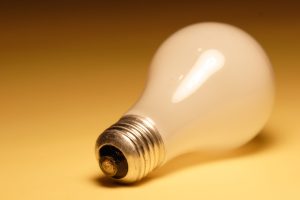 There’s no doubt that we’re becoming a more energy-conscious society. Recycle bins accompany every trash can in sight, electric cars are joining traffic on the highway, all of our bills and bank statements now have a paperless option, and we’re even encouraged to eat more vegetarian meals. And when Congress passed the Energy Independence and Security Act of 2007, the green trend began to take over the electrical industry. Its objective was to improve energy performance, produce clean and renewable fuels, protect consumers, and a host of other requirements. This meant the incandescent light bulb, which we’ve been using for more than a century, was going to be phased out. Now there are tons of different light bulbs on the market, which makes deciding how to light your home even harder. Already the typical 100-, 75-, 60-, and 40-watt incandescent bulbs are falling to the wayside. Hopefully this short guide will help next time you make a trip to your local home improvement store.

Let’s start with our old friend the incandescent light bulb. Thomas Edison’s handiwork. Light is created when the tungsten filament inside the bulb is heated by electricity until it glows a warm, yellow light. In 2007 the EISA demanded that incandescent bulbs become more efficient and only emit a certain amount of light per watt. You can buy incandescents with an average of 40-150 watts and the typical bulb burns out after about 1,000 hours or one year.

One alternative is the halogen, which is still an incandescent light bulb but with halogen gas trapped in the filament. Halogen gas helps to recycle the tungsten back into the filament, making this bulb a big more efficient. This gas isn’t hazardous and is a great alternative for consumers who are ready to take the first step towards energy-efficient lighting. Halogens range from about 30-72-watts and last the same as an incandescent bulb – about 1,000 hours or one year.

Let’s go to the opposite end of the spectrum and focus on light-emitting diodes or LEDs. With only 4-22-watts on average these bulbs can last up to 50,000 hours. Energy is released in the form of photons (light) when electrons and their counterpart, electron holes, come together. Because the wattage is so small compared to incandescent bulbs, LEDs are significantly more energy-efficient and cost-effective. You can save an average of $250 for each incandescent bulb you replace with an LED. And yes, 50,000 hours equates to decades upon decades of use. These standards are created by the Illuminating Engineering Society (IES), which creates the testing procedures manufacturers use for LEDs. Because these bulbs haven’t been around long enough to substantiate these claims, there are some skeptics. But many manufacturers provide warranties.

Compact fluorescent lights came into play before LEDs but aren’t quite as popular, though they are equally as energy-efficient. You probably recognize them as the swirl-shaped bulb. CFLs tend to have a very harsh, white light and most aren’t dimmable. It may also take a few second for them to light up after you flip the switch. Using CFLs for short periods at a time can rush their life expectancy and many of them aren’t made for outdoor use. And though it’s a very small amount, CFLs do contain mercury, which creates potential for pollution if not disposed of properly. But technology improves every day and new, better features for CFLs have been introduced over the past few years. Their life expectancy falls in between incandescent and LED, sitting at about 10,000 hours. Despite their flaws, these bulbs are a great alternative when you want to save money and energy.

Just like nutritional facts on food, the Federal Trade Commission requires manufacturers to put a lighting facts label on their packaging, which contains information like lumens, wattage, yearly cost of the bulb, color, temperature, etc. Remember, wattage is how much power the bulb will use and lumens are how much light the bulb puts out. The more lumens per watt, the more energy-efficient the bulb is.